Last night I was part of The Big HOO-HAA! Melbourne’s Very Haunted House. We took over the Butterfly Club for one night, and filled it with fun characters, shows and lots of other interactive fun! A ton of people went through the Butterfly Club and both punter and performer had a great time. For the most part.

At about 11 o’clock, I took over the Blue Curtain Room, this was to be a place where you could do anything. Some performers turned this into a fortune telling room, others the worlds best birthday party and lots of other ideas. I was playing a priest who believed Jesus was bread (christ has risen etc.) and decided to draw caricatures of punters in the Lord’s image (i.e. as bread), this felt innocent, and cute, or so I thought.

At approximately 11:15pm, a young man entered the room proclaiming “alright let’s talk then.” He had a glass of wine in his hand, and I’d guess it wasn’t his first for the evening. I drew him as a piece of bread, to which he immediately became emotional, screaming that he did not see himself this way, he was offended, he was hurt and as became increasingly obvious, on something. He went on to tell me that he had fought long and hard to not be seen this way.

Just so we’re clear. He had fought long. And hard. To not be seen this way: 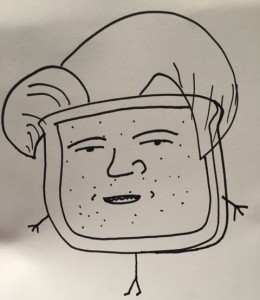 And who can blame him. Who wants to be seen as a 6 ft tall slice of bread with disproportionately small legs, arms and body with a quiff that more closely resembles a natural disaster than any do I’ve ever seen. This man went on to tell me how attractive he is. He corrected himself briefly, saying “Actually I’m not… But I am.” Then he ordered a glass of wine from a curtain rod. At about this point, I suggested he might prefer a glass of water. He ordered the rod not to listen to me, went on to talk about how things should be different. Then he left, only to return with a bottle of champagne.