It has been 904 days since the inspiring, kind and talented improviser TJ Jagodowski met me; and subsequently broke my heart.

Today’s the day I start picking up the pieces and throw them at people.

I messaged TJ Jagadowski after befriending him (on Facebook) following a very limited rendezvous in which he was on-stage and I was in audience.

I should explain that, it was very clear to everyone there (I am sure they would agree, if I asked them) that this particular performance was directed at me, and was an affirmation of his love for me. That’s definite. I engaged in light flirting via Facebook Messenger [Exhibit A] by inquiring as to whether TJ (or Teej-baby) would like to run a course for a friend of mine, and of course I would be there too (said I, playing hard to get). 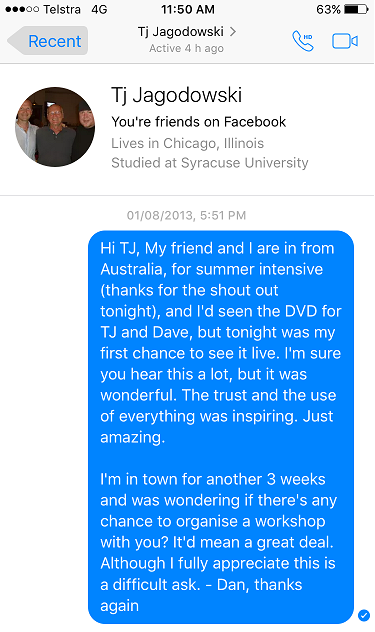 No response… I am not a desperate man, so I handed this with grace, aplomb and a plum.

I am a desperate man, so I plan another trip to Chicago.  I handled this next interaction [Exhibit B] with directness and intense paranoia. Perhaps TJ was travelling and did not think I’d be willing to go to him? But I would go to him. Of course I would go to him… does he not realize my commitment. And so I message him once more. 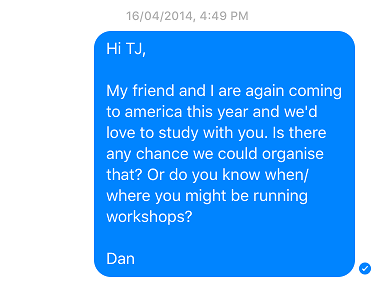 No response… I make no further effort to engage. I’m above this!

I am below this! My nights are spent in absolute terror as I try to untangle the masochistic weave of emotion that has entangled my heart. This next message [Exhibit C], I am not proud of. 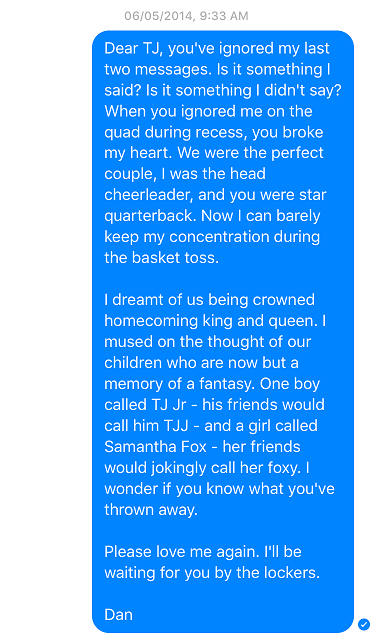 I may have crossed a line in this message.