The lovely Gillian Cosgriff was kind enough to contribute to the How To: Create A Solo Show series with this entry inspired by her many experiences writing and performing around Australia and beyond.

More information on Gill, including the details of her upcoming shows, can be found here (Web) and here (Facebook).

You can also find a great article written by her, just below. Yep – down there. 🙂

Almost definitely over a year ago, the excellent Dan Pavatich asked me to write something for his blog. I said yes. Then he sent me a reminder and I said, “Oh yes! Of course, I forgot, would still love to!” Then a few months later he reminded me again. That was over a month ago. I’m writing it now. You know why I’m writing it now? Because right now I’m supposed to be writing songs and jokes and pieces of a new show and (aside from doing my taxes) THIS is what’s left on my to-do list.

I’m a musical comedian living and working in Melbourne and performing is pretty much my full-time job. I’ve written four one-hour solo shows and I spend most of my year touring them to festivals around Australia. In case you haven’t already figured it out, I am an incredible procrastinator. About five years ago I came up with a project to combat this, and I’m about to embark on it for the fourth time. It’s called 8 Songs in 8 Weeks. 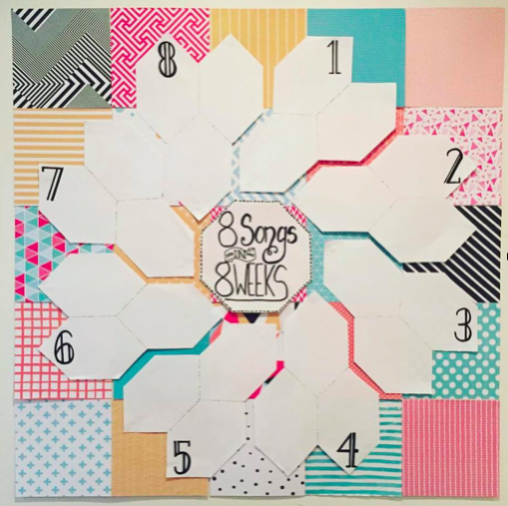 (This is my new 8 Songs in 8 Weeks poster in my study. I avoided a lot important things to spend time cutting out all the shapes. WORTH IT.)

It works like this. To escape my procrastination I force myself to write one song a week for eight weeks. For most people that would be enough, but I’ve sadly discovered that unless I’m accountable I will not do the work. I just won’t. So each week I have to post photo evidence in the form of that week’s song lyrics, on the internet by midnight on Sunday of each week. It turns out that public accountability is my best motivator. At the end of the eight weeks I mash all the songs into an hour-long show and in between I talk about how the songs came to be, what they’re about, and what I think about them. I cannot BEGIN to tell you how liberating it is to stand onstage, play your song, and then say, “I hate this song. I think it’s childish and it only has one joke and unless I really go back to work on it I may never play it again. NEXT.”

The eight-week period always has some natural shape to it that connects everything. The first time I did it I had an entire relationship over the course of the project. I met the guy in week one, we started dating and in week six I found out he’d been cheating on me the whole time. At the time I was pretty sad about it but it turned out to provide an EXCELLENT shape for the whole thing so I guess what I’m saying is, thanks Steve, you dickhead. 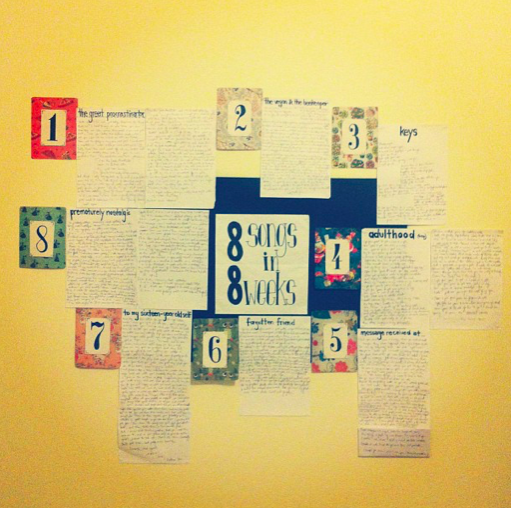 (This was a finished 8 Songs in 8 Weeks: Volume 2. The relief at seeing all eight filled in provides a rush of endorphins no exercise will ever give me.)

Because the 8 Songs project is such an intense period of forcing myself to be creative, I always do a LOT of homework in the lead up to writing. This has fed into my writing process for making a one-hour show as well and maybe some of these things will work for YOU, internet friend.

How I Write A Solo Show

To stay up-to-date on Gillian Cosgriff, follow her here: